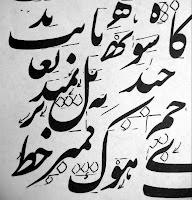 I’ve just received permission from the author to publish his response to my previous post. Note that the response came several months after the original response to his letter was sent. I hope it’s helpful to people studying Arabic out there. After reading it, I ran to my bookshelf and started dusting off my learn Arabic collection and began to learn some of the tri-literal root patterns.

Since you were so kind to take the time out to write and give me such valuable advice I thought I’d give you the update on how my immersion went.

I stayed with a family of mine who lived out there and spoke nothing but Arabic around the household. This was half of my immersion.
The second half and what I found the most beneficial of was the centre I enrolled in for studying Arabic (Al Diwan, Cairo), I was taught Arabic…in Arabic! All the classes were conducted in Arabic and there was an air of taboo for anyone who even thought about speaking English. All these factors combined on top of my almost obsessive desire to hear nothing and speak nothing but Arabic helped. Everything was geared to getting my tongue used to it, if I learnt how to say ”What is the time” in Arabic I would walk around for half an hour and ask ten to fifteen different people what the time was until my tongue was used to it. I dreamt in Arabic and my English deteriorated a lot for it! However I found after spending two grueling months out there I could converse freely and easily on many topics, watch TV without a problem and lastly and most beneficial of all I began to understand the mindset of the people, it was as if a whole new world had opened up to me through being able to speak to them, something I believe that would of been absolutely impossible if I had spent my time abroad speaking nothing but English.

Arabic is supposedly very difficult however I found it to be a language that was set up very very mathematically in terms of grammar…(unlike good old English which I am glad I got for free! learning it would be a nightmare).

languagesdue to its tri-literal roots. Knowing the root words for example of Ka-Ta-Ba and you get four or five words of vocabulary for free, such as Kaatib(writer), Maktaba(library) etc.

Coming back to London I will be continuing with my Arabic but I have now taken up studying French as well. French because I speak English natively I believe should be relatively less foreign compared to Arabic but finding a French environment will be a lot more difficult

One last concluding point: I believe I made such a tremendous amount of progress for my avoidance of English and its speakers, there were people who studied at the institute I did and were in Cairo….some longer than I had been, however they had made one problem which was to make friends at the institute who were themselves fellow English speakers…they organised outings together…went out together, you name it. That I believe had quite a negative effect in terms of their spoken Arabic.

In my opinion in a foreign country native speakers of one’s language are to be avoided like the plague.

I thank you once again for your advice as it was very useful.