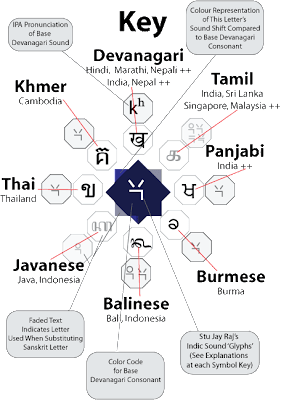 The reason I love playing and listening to jazz so much is because you’re able to get into the soul of the players by hearing how they improvise on a theme. Language is not that much different.

I’ve noticed what could be described as almost an unquestioning deific reverence and fear paid to the writing systems of Indic language systems by their users (and learners of them). Whether it’s the Devanagari script used to write amongst other languages, Sanskrit, Hindi, Marathi and Nepali, or the scripts of other languages in India and surrounding countries like Panjabi, Tamil, Telugu or as far down as Southeast Asia including Thai, Lao, Burmese, Khmer (Cambodian), Balinese orJavanese, when you start to scratch the surface of the origins, grammar or even just the reasoning of certain things that would seem strange to outsiders, the eyes of your average Joe who’s spoken one of those languages since birth will tend to glaze over. (Now THAT was a long sentence!)

That’s the Problem with Turtles… It really shouldn’t be that way!

Those Indians were pretty cluey back in the day. They developed an alphabet thousands of years ago that was a virtual GPS for the human mouth!

Just like the theme and variation in Jazz, all the languages that I’ve mentioned above (and many more) have used this basic map as their base – a reference guide and then coloured it with the sound filters of their own respective languages.

To draw an analogy from English, take a common sentence that we use every day like:

This is the ‘base’ or ‘theme’. A variation might have those same letters read as:

For many, the whole concept that ‘Dat’s’ had come from ‘That’s’ was never explained, leaving not only learners, but also native speakers of the language in a haze as to ‘why’ certain things are about the language and just accepting that it’s something beyond the comprehension of mere mortals.

Part of my **Mnidcraft
**course is to get a good grounding in the principles of Indic based scripts and develop some level of proficiency in identifying several the scripts including Devanagari, Thai, Khmer and Burmese.

I developed my ‘Indic Consonant Glyphs’ and the ‘Stuart Jay Raj’s Indic Script Consonant Compass’ as a tool to accelerate the acquisition / learning of scripts based on the Indic sound system themes and variations.

I’ll often hear people measuring the complexity of a language by the number of letters in its alphabet. This to me is absurd as the practice of judging a presentation’s quality by its PowerPoint slide count! (Another pet hate of mine… which led me to designing my ‘Present!‘ presentations workshop who’s subtitle is ‘Bringing Presentations Back to The Presenter‘).

It’s this body count (or in this case consonants + vowel count) that has turned many a learner off from learning languages like Thai, Sanskrit, Khmer and Burmese.

What Language Would You Prefer to Learn?

I don’t know about you, but I don’t think I’d be lining up to learn Wadafrackizet! (Ok, I admit it – I probably would)… but honestly, Soowizy sounds just so … EASY!

The Cardinal Points of the Mouth

As you read through the brief explanation to each of the following glyphs, place your tongue / mouth in the position and hold it there. Once you can do it for each glyph, move your gaze from one glyph to another at random and practice locking your mouth into the correct position according to the glyph that you’re looking at.

Drilling yourself for about 2 minutes like this should be enough to start to develop some long lasting muscle memory.

Now, I know the Korean speakers out there must be thinking “Hmmm… some these symbols seem eerily familiar!”.

To add value to learning the Korean alphabet, I suggest spending an extra 10 minutes to learn how to touch type in Korean also. The keys are very logically set out between:

Each syllable in Han Geul is broken into a beginning (initial) sound, vowel and final sound component (if necessary). The symbols used to represent each of the sounds were based on the various parts of the mouth from which they were produced.

I have combined this principle with the basic principle of the Indic Scripts ‘Map of the Mouth’ logic to develop my own symbols.

It’s interesting to note that the sound for ‘r‘ / ‘l‘ in Korean is uncannily similar to many of the symbols used to represent these same sounds in Indic (Brahmi) based scripts that display a ‘rolling tongue‘ in one rendering or another. When I’m learning a new Indic script, this is actually one of the first memory points I will look for – I will peg the similarity or difference of its ‘r’ sound to the ones that I already know. I can’t include all the samples in this text based medium as the fonts probably won’t render properly on your computer. You can see them on the main ‘Indic Consonant Compass’ chart though.

Another shape that is very similar include the ‘base voice’ symbol which in many scripts is a circular shape of some sort.

The ‘y’ symbol which in Korean is normally ‘two prongs’ heading in the vowel direction. In the Indic scripts, the ‘y’ sound is usual a 2 or 3 pronged shape which I imagine is a representation of the way the tongue interacts with the palate.

Here is a sample:

## The Key Actions of the Mouth ## Colour Coding

I have also colour coded each category within the sound system to give a colourful representation of the textual glyph. There are 5 base colours that correspond to each of the 5 cardinal points of the mouth (see above).

When comparing the sound shifts from the original base letter to the target language letter, you can either follow the ‘glyph’ transliterations in the octagon adjacent the target letter, or just look at the colour changes. Getting a visual and emotional representation of these sound shifts through colour is another device that I find really useful in ’embedding’ the language within me.

There were so many languages to choose from. I broke this chart down to 8 scripts that I think would cover a good portion of the globe. The languages / scripts with my reasoning for choosing them are:

As my New Years gift to you for 2009, rather than giving you a cruddy jpg or bmp version (like you see above) and waiting for you to come to my Mnidcraft workshop to receive a full high resolution version, I have included a PDF version of my “Indic Script Consonant Compass – v1.0 – Southeast Asian Version”. I have created it using vector graphics, embedding the fonts where possible and expanding any other fonts that could not be embedded. What this means is that you are free to print out the chart to enormous sizes and stick it all over your home, office, toilet and any other place you see fit. Getting one or more of these scripts under your belt is an investment that you won’t regret.

Remember, these are only the consonsants… and admittedly, there are a couple of rare consonants in each script that I haven’t included on the chart as it would in my opinion add unnecessary complexity to learning the scripts. There is also some funky stuff happening with the Tamil that I’m working at ironing out in future versions. If there are any Tamil experts out there, drop me a line!

You will also notice that I haven’t touched on vowels. … stay tuned… that will come in a later installment.

I also have some surprises planned for this whole ‘Indic’ kick that I’m on. If time permits, I’m sure that you will see the bizarre fruits that my brain has borne in the near future.

The original feed from this article comes from polyglot Stuart Jay Raj’s ‘Behind the Curtain’ Language and Mindskills blog – [http://stujay.blogspot.com](http://stujay.blogspot.com).If you have any suggestions on topics that you’d like me to blog about, drop me a line!
![](http://www.qtl.co.il/img/copy.png "Copy selction")[![](http://www.google.com/favicon.ico)](http://www.google.com/search?q=Click%20Here%20to%20Download%20Stuart%20Jay%20Raj's%20SE%20Asian%20Indic%20Consonant%20Compass%20v1.0 "Search With Google")![](http://www.qtl.co.il/img/trans.png "Translate With Google")
EVERY WEDNESDAY