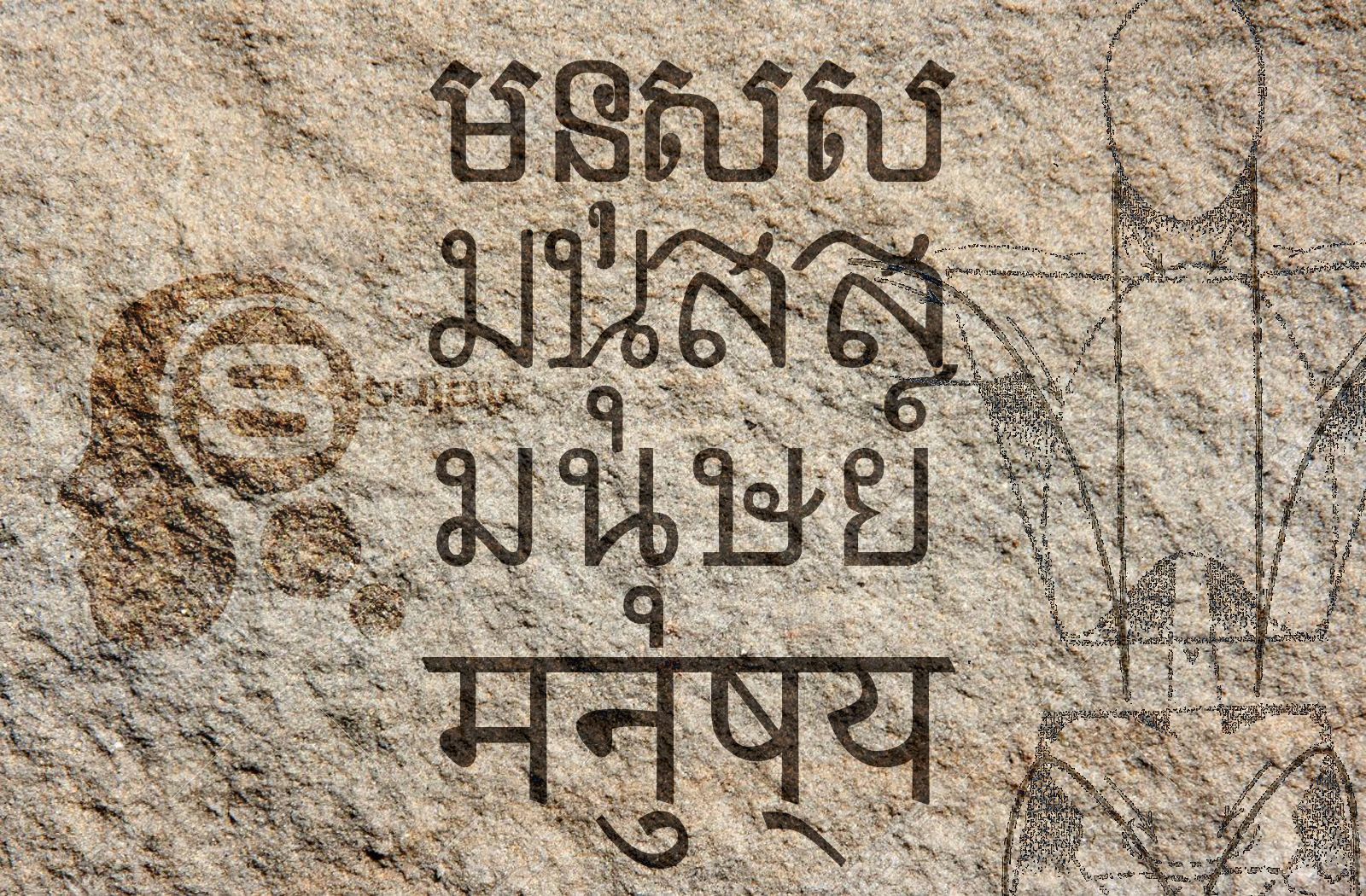 Over the weekend I had the privilege to present to a group of around 100 expat Indians working in the Engineering and Technology sectors in Thailand.  I had spoken to the group a couple of months earlier and after the seminar, many people approached me and mentioned how much trouble they were having learning Thai.  Some had been here for years, and had all but given up on the notion of being able to speak Thai because it seemed so ‘alien’.

With that in mind, I entitled my presentation on the weekend ‘How to Thaiyify your Indian Roots’.  It turns out that a lot of the dismay that many of these Indians had when it came to the Thai language came about by getting frustrated with the convoluted explanations or total lack of explanations for different things about the language when they asked their language teachers.  The reality is that anyone who speaks a language that has a writing system based on the Brahmic / Indic ‘Map of the Mouth’ system, has an enormous advantage over say native speakers of European languages like English, French or German as all of the tone rules are based around the same mental ‘Operating System’ as that of the Indians, as well as a great deal of the vocabulary. Despite different Indian languages have varying degrees of Sanskrit, someone with the knowledge of an Indian language with even a low level of Sanskrit influence will still recognise a large amount of words, terms and concepts in Thai once the Thai ‘mask’ is understood or ‘decoded’.

To illustrate this, I took the Preamble to the ASEAN charter and did a few fun things with it which I will show below.

What I will do is:

If you speak Thai, Khmer or any language that has a script based on the Brahmic map of the mouth system, I think you will be surprised at the results… or maybe not.

(Note that I have used the Devanagari script for all the words that would possibly be mutually intelligible – i.e. words with Sanskrit and Pali roots as well as place names. If you read Devanagari, note the strange choice of letters for some place names.  This will start to give you an insight on some of the sound shifts that have happened with the Thai script). I have chosen Devanagari as it is a script known by speakers of many common Indian languages such as Hindi, Marathi, Nepali and Sanskrit. You could actually do the same thing into any other Brahmic script like Tamil, Gurmukhi, Telugu etc. and have a similar result / experience.

Here is the same Devanagari version,  but this time with country names in the original English:

During my presentation, I asked each group in the room to discuss amongst them at their tables what they thought it might mean.  After a little discussion, for all the Indians in the room, there was no ambiguity as to the meaning of the Thai translation.

So How Similar is Khmer?

Looking at this chart, we can see that most of the Sanskrit / Pali terms that we have in Thai have come via Khmer.  So how mutually intelligible is Khmer and Thai? For that matter, how much Khmer could a speaker of an Indian language understand?

To start, here is the original Khmer translation of the original passage – the Preamble to the ASEAN Charter.

Below, I have done the same letter substitution exercise, only this time I have substituted each Khmer letter for its Thai equivalent.  I have coloured all words that a Thai would understand or be able to has a very good educated guess in blue:

One thing that Thais would notice a little different with the Khmer is that place names (country names) are based on the French pronunciation of those places.  Other than that, the Khmer reads as quite intelligible and even poetic Thai. Also notice that in Khmer, just as Thai has 3 different ‘classes’ of consonants based on what were traditionally ‘voiced’ as opposed to ‘unvoiced’ and ‘closed throat’, Khmer has 2 different classes or ‘series’ of consonants based along similar lines and you will often see the ‘first’ or ‘A’  series /l/ ឡ used in the spelling of foreign words like ‘Lao’ ឡាវ which is the equivalent of writing ‘ळाव’ in Devanagari or ‘ฬาว’ in Thai, rather than the standard /l/ लाव ลาว.

So I can read Thai words – why do they sound so different then?

Some of you might be thinking that this is quite a limited snippet of text to use as a comparison and I agree.  The reason I chose it is because I am working on a pan-ASEAN project and I was comparing all the languages of ASEAN and looking at the way that each language had rendered the ASEAN Charter.  Because it’s a formal document, there will be a tendency to use more formal terms which are usually more Sanskrit heavy.  It is a good starting point though and will give you an idea of just how much Sanskrit there is in Thai.

Rather than go deep into the reason why things sound a little strange in Thai compared to what Indians might expect these equivalent Sanskrit based words to sound like, I will give you three easy things that you can do to your existing knowledge of Sanskrit / Pali words to make them sound very Thai.  Even if a word isn’t a standard word in Thai, if you choose a Sanskrit version of a word and ‘Thaiyify’ it using these principles, just as the Khmer transliteration into Thai sounds quite nice and very familiar to the Thai ear, many Thais might hear the term that you are using and not find it too foreign at all and could even hazard a good guess as to what it means.

All languages that have a writing system based on the Brahmic / Indic Map of the Human mouth follow a wonderfully logical pattern – Unaspirated Unvoiced, Aspirated Unvoiced, Unaspirated Voiced, Aspirated Voiced.  In Thai, the voicing was lost a couple of hundred years back, which means now that three out of 5 letters in each of the 5 ‘vargas’ or ‘rows’ of consonants sound identical:

That is why in the last example, the word जन /jana/ meaning ‘person’ in Sanskrit is pronounced ชน छोन /cʰon/ in Thai.

3. The Throat Closes at the End of Each Syllable (Especially ending in a Consonant)

The final piece to the puzzle is training your throat to close and ‘kill’ or ‘cut off’ the consonant sound at the end of a syllable. Speakers of Indian languages as do many speakers of many European languages take great pride in making sure that every letter in each word gets its fair share of pronunciation.  If there is a ‘p’ or a ‘t’ at the end, speakers of ‘good Hindi’, or ‘good Sanskrit’ – or even ‘good English’ will make a point of ‘popping’ their ‘p’ at the end, or exploding their ‘t’ and ‘k’ at the end of each word that finishes with those letters.  In Thai, you need to train your mouth not to do this anymore.  As soon as your tongue hits another part of your mouth, your lips touch or your throat closes, you need to kill the sound there and then, with the exception of ‘l’ and ‘r’ – here the throat closes, but the passage through the nose is left open meaning that final ‘r’ and ‘l’ all turn to the letter ‘n’.  To show what letters turn to what as finals, you can use the following chart.  I find memorising charts tedious though – so just remember, at the end of a syllable, close your throat and wherever your mouth intersects itself (e.g. tongue on palate or lips together), the sound stops there.

Now that you have 3 point formula for making your Indian roots sound very Thai, examine the following words.  See if you can guess each one before you read the Thai pronunciation.

Note that there is a general rule where a Sanskrit व ‘v’ is realised as ब ‘b’ in Pali which subsequently become ว ‘w’ and พ ‘pʰ’ in Thai. There are often Pali and Sanskrit equivalent words that both enter Thai having slightly different pronunciations and shades of meaning.

Here are the Thai versions of each of those words:

How did you go? If your Indian name is ‘Sanjay’, next time a Thai asks you what your name is, you can tell them ‘Somchai’ – which is also a very common Thai name for men.

Once you start to peel the mask away from the Thai way of pronouncing things, you realise that there is a lot of common ground there between many Indian languages, Thai and as a bonus, Khmer (and many other languages in the region).

If you do speak an Indian language, first thing is first – have a play around with my interactive Indic Consonant Compass and start to get used to some of the letter shapes – or start getting some Thai texts and converting them into your own script with one-to-one letter substitution. See how much you understand.  Then, apply the 3 rules that I have mentioned above and try those words out on a Thai.  See if they understand you.

If you want to go the extra mile, do the same with Khmer while you are at it.  You might find that learning both languages in tandem will be a synergetic experience and you will start to master the regular sound shifts that happen between your language and Thai / Khmer.

I Want to Learn More

I have written my Cracking Thai Fundamentals book and interactive programme in a way that will fast track any Indian language speaker’s learning of Thai. Grab a copy of the book and then use the interactive online tools that I have made available. You can read the entire first section of it here.  I will be running workshops throughout the year particularly focused on speakers of Indian languages to help you improve your ability to hear, speak, read and write Thai – so if you get word of one, sign up so we can spend some time together.  Once you get past some of these basic cosmetic characteristics of Thai, building up a functional facility in the language shouldn’t take much time at all. Let me know how you go!

About Stuart Jay Raj
Previous Post : How to Develop Thought Fluency in a Foreign Language   Next Post : How to Become 'Gifted' at Learning Languages - You're Never too Old (Revisited)