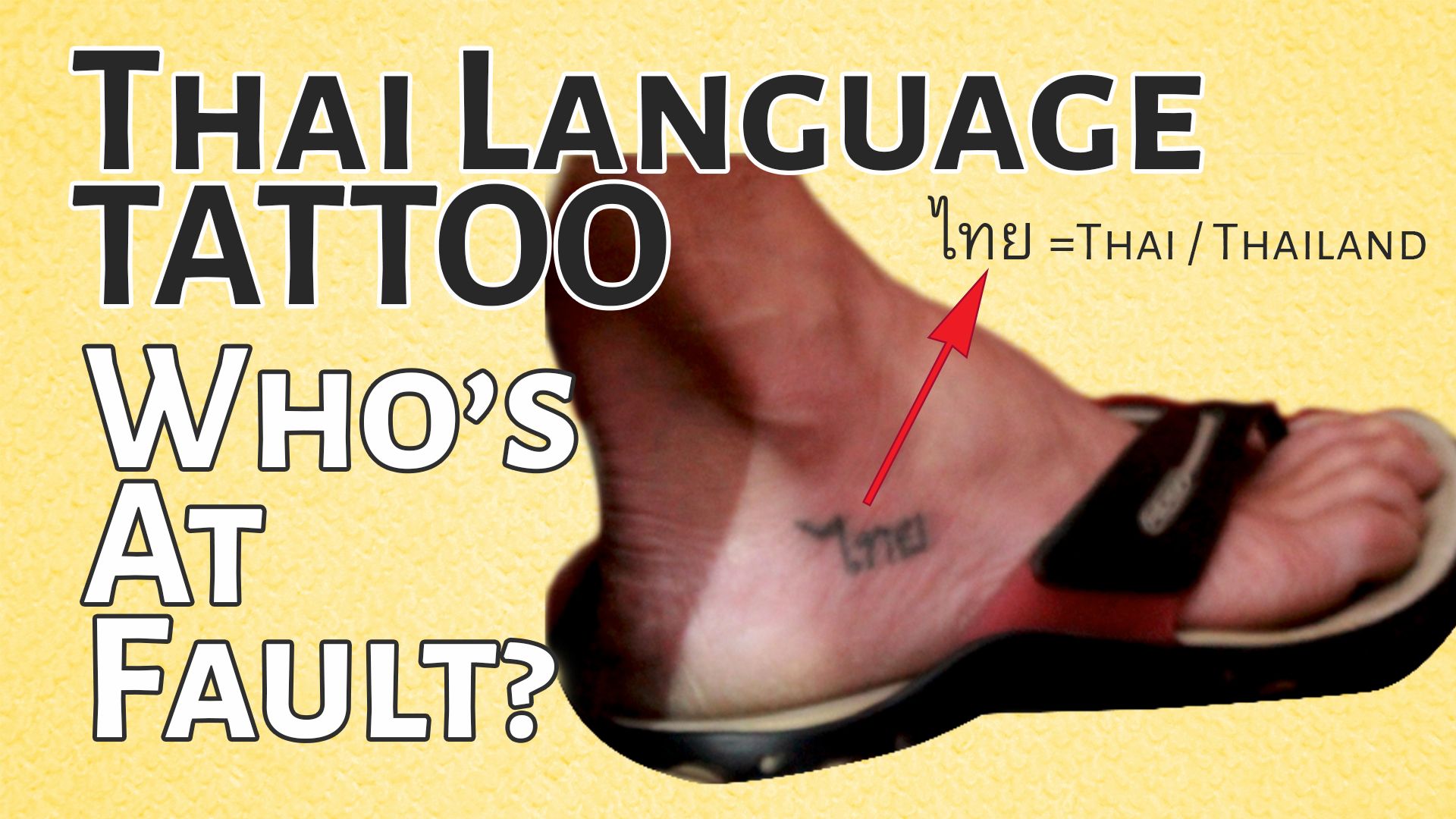 I was sitting on a flight when I noticed a lady and her husband sitting just across the aisle from me. They were very well mannered, seem well travelled and didn’t hesitate in giving other people on the plane ‘insider travel tips’ even without being asked about different places that they had frequented around Asia.

Despite the fact that they were well travelled, the lady insisted on lifting her feet up not only onto her seat, but onto the head and arm-rests of the seats in front of them. Each time she did this, I noticed that it was making the Asian couple in front of her feel very awkward, but the lady and her husband seemed oblivious to the ire that was starting to seethe.

And then the kicker - literally. The lady had the word ไทย 'Thai' tattooed in lovely Thai script right there on the heel of her foot.

You might have noticed lately that there has been a considerable amount of PR in Thailand advising foreigners to be careful with what they get tattooed on them, and especially not images of the Buddha. 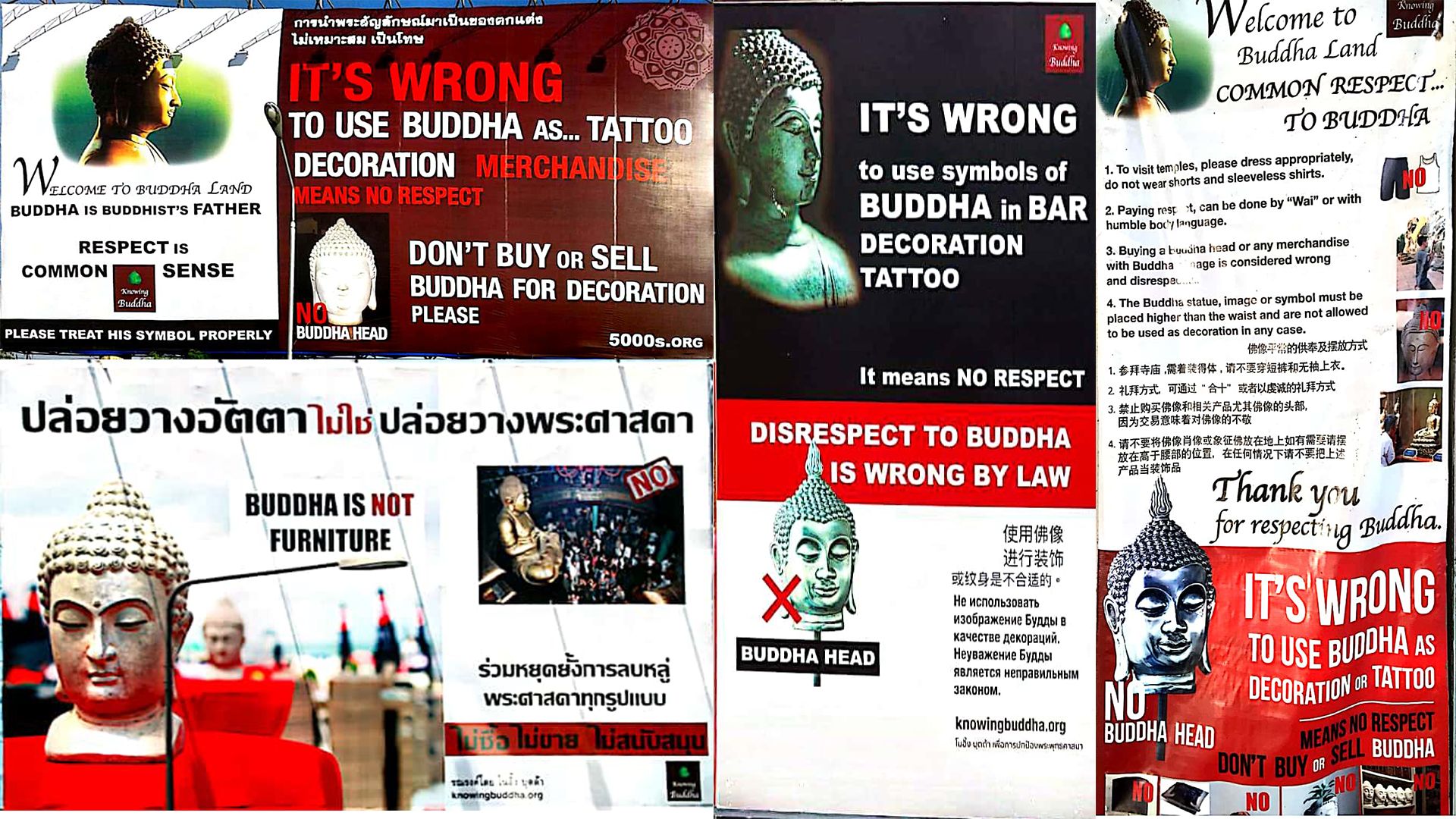 Given that the word ไทย 'Thai' which stands for all things Thai - and all things Thai enjoy a deified state in Thailand, and given that Thais view the head as the holy of holies, while the feet are the most putrid, dirty part of the body both literally and metaphorically, the fact that this lady managed to get a tattoo of the word 'Thai' in Thai on her foot beggers the question - upon what ill advice did she do that, and why didn't the person doing the Tattooing know that it probably wasn't a great idea?

After about an hour of hesitating as to whether or not I should say anything (as she was en-route for Thailand), I eventually approached the couple and after a bit of initial chit-chat, I asked the lady where she had the tattoo done. She said proudlly - 'Thailand'. Just to be sure, I asked if it was a Thai that had done it for her - as it was such nice script, she again proudly responded 'Yes'.

As she walks down the street in Thailand - or goes for a foot massage, I can't imagine what the reaction would be. Well actually, I can. When I got off the flight, I posted the image on Facebook and the comments that came in from my Thai friends didn't surprise me. They included:

In fact, I can’t imagine any Thai that I know being able to bring themselves to do such a thing without warning the person first that it’s not advisable.
What was the tattoo artist thinking?

Now for those of you who upon seeing the tattoo of ไทย on her foot thought 'That looks cool', or just felt indifferent, I'll try to put it into a bit of perspective here.

Diamonds on the Soles of Her Shoes?

I imagine when Paul Simon wrote this song he didn’t see those shoes in Thailand… or anywhere else in Southeast Asia for that matter. For anyone that hasn’t read any guide book written about Thailand, you would know that feet are frowned upon - big time. I don’t like how many of these books just say ‘don’t raise your feet or point your feet at anyone’. To really appreciate it, you have to understand WHY, and then embed that program within your subconscious… so here goes.

The Head is the Holy of Holies

The head, is the holiest and most respected part of your body. Consider it a sacred place. So now, close your eyes and imagine out of your head are radiating soft flowing beams of brilliant white light that follow you wherever you move.

The head is symbolic of everything good, virtuous and of value. E.g.:

Now slowly move from your head to your feet. As you do, see the light fade from your head and see it turn increasingly dark, to black, to dirty, sticky, grimy, grease spattered tar. Not only that … now, as you walk, everywhere you walk, there is a greeny, black sludge that stinks to high heaven squelching between your toes that comes up to your knees. Can you feel and smell that sludge all over your black, sticky, smelly tar-covered feet?

Close your eyes and soak in the imagery that you have become now.

That in a nutshell is the ‘Thai operating system’ that Thais are wired with from birth. And it is that same Thai Operating System that I try to help install into foreigners through my Cracking Thai Fundamentals programme and book. It's not just about language - it's everything else that goes on, with the language being the final part that's rendered to the world. The head is the holiest place, the feet are the epitome of dirtiness and filth and the general rule of thumb is:

Never bring something up higher than it is perceived that it should be … both literally / physically and metaphorically.

What this means Physically

In a physical sense, that means yes, you never raise your feet up. When you sit down, don’t sit with your foot on your knee. Don’t put your feet on seats. When you walk past someone, especially if they are older than you or in an equal or higher social position, as a sign of respect, at least dip your head a little to show you’re making an effort to bring your holy of holies down level with theirs. This will be appreciated.

In a physical sense, it also means that you don’t put things of high value on the ground or near the feet. If you go to a restaurant, you will notice that bags are placed on seats, not on the floor. Sometimes on a crowded train, you will notice strangers offer to hold someone’s heavy bag for them lest they have to put it on the ground. You do not tread on money as it bears the image of His Majesty the King.

What This Means Metaphorically

In a metaphorical sense, you must first accept that in society there are many different levels. Even if you are personally an egalitarian person, that doesn’t change the fact that the rest of society accepts that there are different levels and they are respected. For example, if a child ‘wai’s’ you (bows with their hands together), you as a rule do not ‘wai’ back as you are in a senior position to them. The more natural and appropriate thing to do would just acknowledge their Wai with a little nod of the head and maybe a ‘khrap’ or ‘kha’.

You shouldn’t take or draw a picture where something that is thought to be ‘high’ is placed lower than something that is perceived to be ‘lower’ – e.g. you would not photoshop a picture of your own head above a statue of the Buddha, the King or even a temple. Doing such a thing may even elicit a violent reaction from a normally very peaceful person.

These things are all held in the highest places for Thais and it is all of these things that are embodied in the word ไทย 'Thai' - That same word that was tattooed on the lady's foot.

For more resources on Thai Language and Culture, check out the hundreds of hours of content that I have at https://jcademy.com.

About Stuart Jay Raj
Previous Post : Danger in Getting Tattoos in Thai, Chinese, Arabic and other Foreign Scripts - Think Before you Ink   Next Post : 48 Pali and Sanskrit Root Words in Thai to Give you even More Thai Language Super Powers