How to Develop Thought Fluency in a Foreign Language 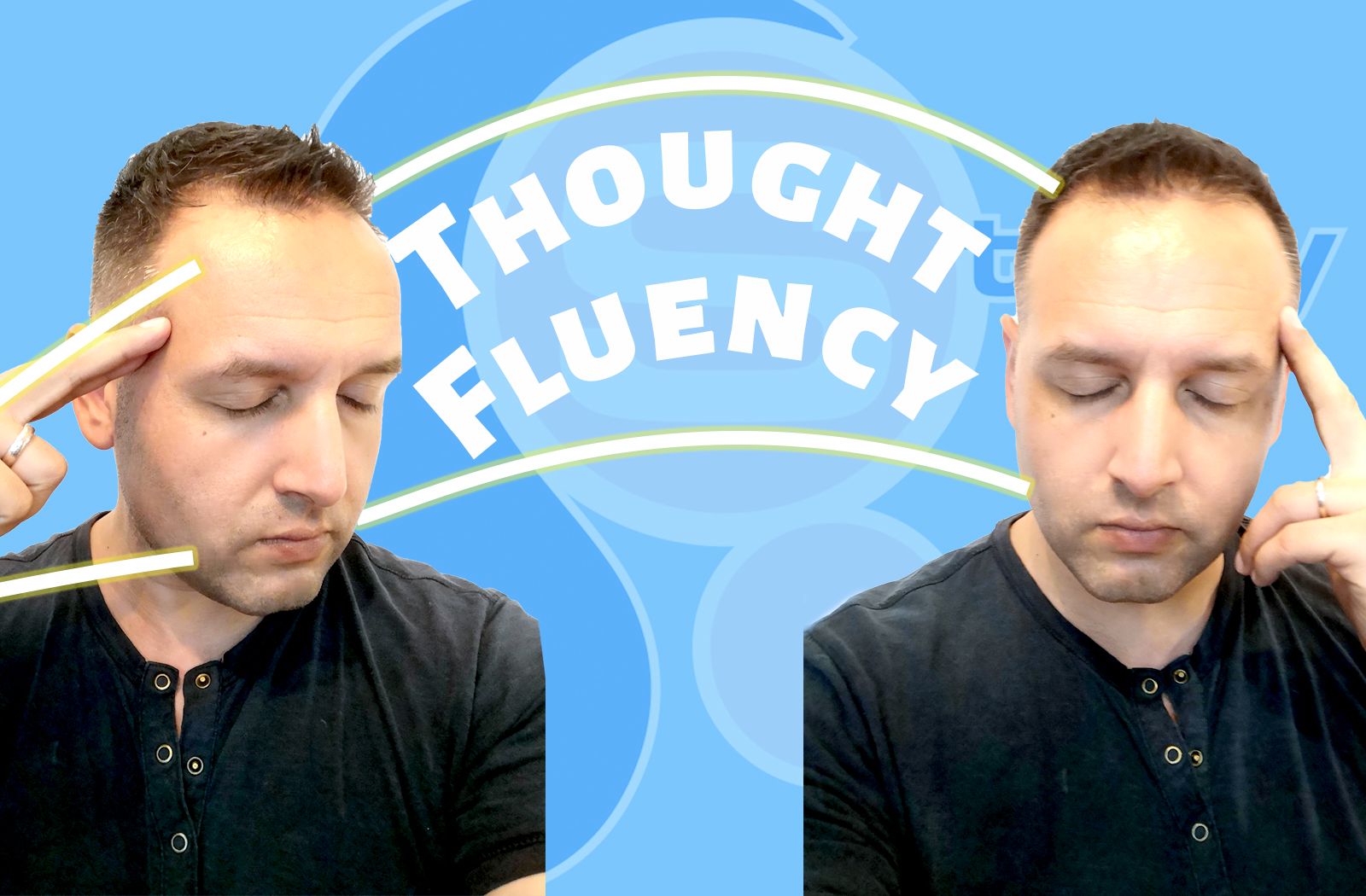 One of the most powerful skills you as a language learner could hope to develop is the ability to think directly in the language that you’re learning without having to go through your mother tongue. I call this ‘thought fluency’, and it is the core skill that I aim to get kicking into action from the earliest stage when I’m learning a language.

It actually goes one step further.  If you ask truly professional interpreters what kind of interpreting is easier – Consecutive Interpreting (waiting for the speaker to say a ‘block’ of speech and then interpret it block by block), or Simultaneous Interpreting (interpreting in real time – speaking at the same time as the speaker usually through a microphone / headphone relay system), they would probably say that surprisingly, simultaneous interpreting is less of a chore than consecutive interpreting. The reason why this is true at least for me, is because as long as I have confidence in my own language ability to truly comprehend the language that I’m listening to, and I have confidence in my ability to communicate meanings clearly in the language that I’m interpreting into, I don’t really have to think.  As the speaker speaks, I see and comprehend what they’re saying in the same way you would comprehend an audiobook in your mother tongue.  All I do then is just retell the story that I’m experiencing in ‘X’ language mode.  In fact, if you were to ask me what exact words the speaker said in the original language, I might struggle to tell you exactly word for word what they said as I’m seeing and experiencing ‘meaning’ or ‘story’ rather than analysing every word.

How Can I Experience Thought Fluency?

Remember when you were a kid and you used to wind your brother or sister (or friends) up by mimicking them? That’s exactly what shadowing is.  There is a whole field of research done into using shadowing as a language learning technique. There is a lot of material out there on shadowing – after this article, spend a few minutes looking up and bookmarking some of the articles, research papers and YouTube clips.

Rather than go over academic reviews however, I thought I would prefer to show you how I personally use shadowing and how you can make it just a natural part of your life – a part that will pay off big learning dividends over time.

There are different types of shadowing exercises you can do to help achieve different things. Supposing your mother tongue was English and you were learning Chinese (Mandarin). In the following examples, we will call English ‘L1’ (Language 1) and Chinese ‘L2’ (Language 2). I will briefly mention each shadowing scenario, how to do it and what skills each one will help you develop. Feel free to substitute ‘Chinese’ with the language that you are learning. Remember, you don’t need to be fluent in the other language to do most of these exercises – and you don’t need to know any other language to do the first two which are really the most important when it comes to self awareness, speech modelling and thought fluency.

Description: Listen to a person speaking English either live, on television or radio and mimic everything they do. This doesn’t just mean say every word that they say.  It means you need to copy their facial expressions, sentence cadence, produce the vowels, consonant sounds and ‘tones’ of speech exactly as they are doing them.

Description: In my opinion, this is the most powerful exercise of them all.  Just like in exercise one, sit and listen to a person speaking either on the television or live and start to speak over the top of them.  Rather than mimicking them, in real time, tell YOUR version of what they’re saying. Accept that there is no wrong interpretation.  Whatever you understand them to be saying is what you say.

*“When we walked into the nightclub, the decibel level was excruciating – so much so that we decided to leave”. *

Your L1 : L1 Rephrasing rendition of that (said at almost exactly the same time as you hear it) might be:

“As soon as we got into the club, the music was so loud that we decided to up and leave”.

For the purists there, you might be alarmed that this isn’t a perfect translation of the sentence.  I don’t care.  It’s my mind’s interpretation of the sentence and it is how my mind realised and reacted to what I heard. The reality is that whether translating into another language or into the same language, there is no such thing as an ‘exact’ interpretation where every single nuance is matched one to one.  You need to feel comfortable with that concept and as that song in Frozen that we love to hate says, you just need to “Let it go!”.

Description: Listen to a native L2 (Chinese) speaker and speak over the top of them, mimicking them in real time in their own language. As you do it, allow your mind to step out of your ‘mouth’ and observe all the little things that are being done by the speaker.  How are they breathing?  What is the cadence of their voice like? What sounds run into each other? What sounds don’t? What new words or phrases do you hear? Do they say things in a different way to how you would communicate a similar meaning? How do their vowels, consonants and tones differ from your normal way of articulating them?  This exercise shines a light on how you use the language and can identify very quickly opportunities for you to work on in developing your own skills in that language.

Description: Listen to a native L1 (English) speaker speak and speak over the top of them, interpreting what they say in real time into L2 (Chinese). The key is to keep your mind in the same mode as it has been in for the past few exercises.  If your language skills in the language aren’t up to that level yet, don’t worry.  Go back to the L2:L2 shadowing exercise, record yourself and then analyse what’s being said and what’s going on in their mouth and yours. Working out the meanings, idioms and nuances through this exercise can build you up to L1 : L2 interpreting stage.  Don’t be afraid to come back and visit this stage from time to time – using different levels of L1 speech.  You won’t wake up one day and instantly be able to do it.  It is a skill that will happen gradually over time.  It IS a skill however that will have a profound effect on how you communicate naturally in the language and is a sign of true thought fluency in the L2 language.

Description: Listening to a native speaker of a foreign language speaking their language on television or live, speak over them interpreting what they are saying into YOUR version of their language.  This is something that can actually be done at all stages of the language learning process, and for some is even easier than L2 : L2 interpreting.  You often hear people say ‘I understand more than I can speak’.  This exercise by its own nature, is paced to your own personal language level.  You have the chance to re-communicate a meaning in your own way – and it might be just as understandable or even more understandable than the way that the original speaker communicated it.

How Do I Start?

The wonderful thing with today’s technology is that everyone is walking around with earphones plugged into their ears and nobody will think that you’re crazy if they see you speaking into the air just as long as you’re wearing a set of earphones.  As you’re driving, walking through the city or taking a shower, just keep audio playing either in your L1 or L2 and do the exercises as you go about your day. You may set some formal time to seriously concentrate on it, but you can really develop some very advanced language skills through just maximising ‘dead air’ time during your day.  That is, time that you’re not having to actively concentrate on something else even if you are in the middle of doing something else like driving, walking, cooking, washing etc.

In my Cracking Thai Fundamentals book, I have a whole section on ‘Thinking in Meanings’, and I also have interactive activities set up in the online ‘Thinking in Meanings’ modules.  While the book is focused on developing Thai language skills, you can use the principles that I teach in that section and apply them across to any other language.  You will learn how to anchor meanings into all different things including shapes, body signs and emotions outside of language and then start to cognate and create new meanings outside of your mother tongue and develop thought fluency using those as your meaning building blocks rather than your mother tongue.  That way, you can then create shortcuts directly into whatever language it is you’re learning. The most important thing is ensuring that you have that fundamental ability of ‘thought fluency’ outside of the actual words that you hear in your mother tongue.

About Stuart Jay Raj
Previous Post : How Safe is it to Travel in Asia   Next Post : Thai, Khmer, Indian ... Same Same?